AccessiBe Is Not Your Friend

The following view does not represent my employer, or any other entity I am involved with. The views expressed here are strictly my own.

A recent thread on Twitter caught my eye and it was probably the most ridiculous thing I have read in a very long time. 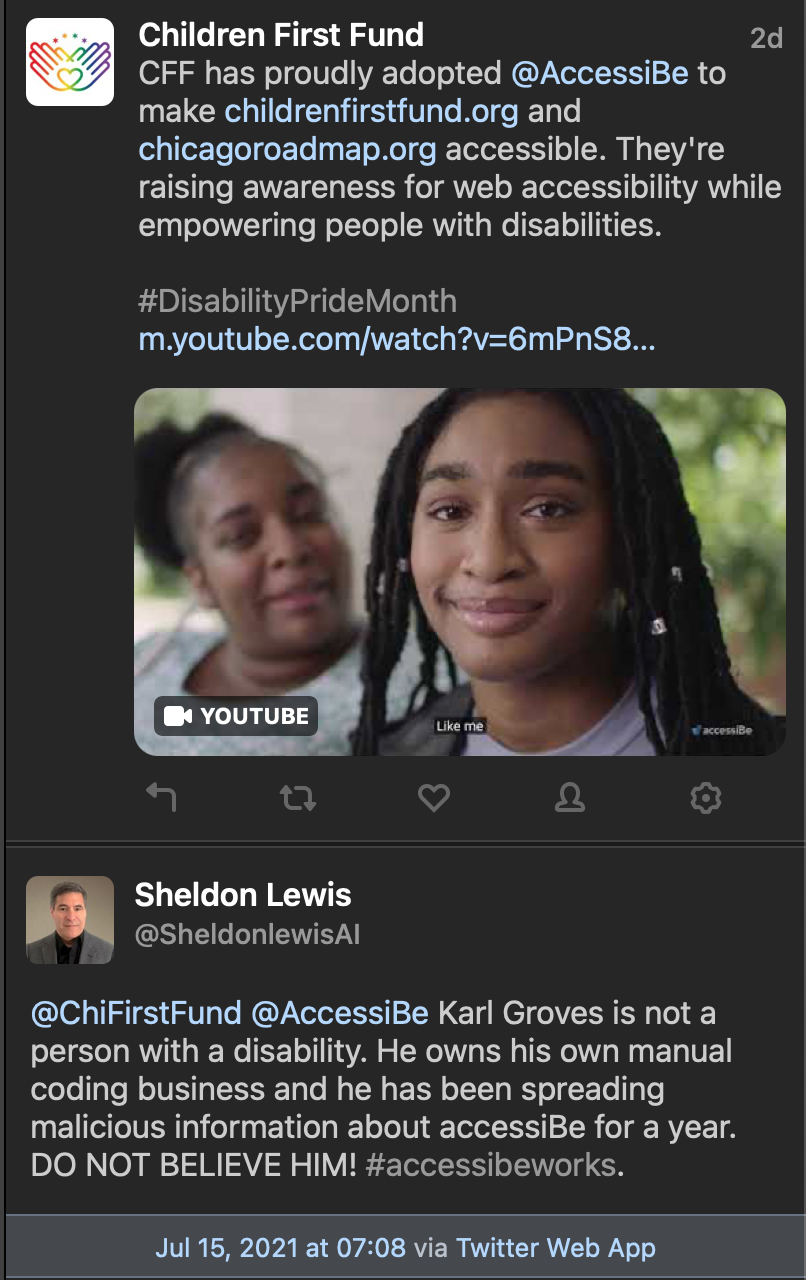 There is a bit to unpack here. 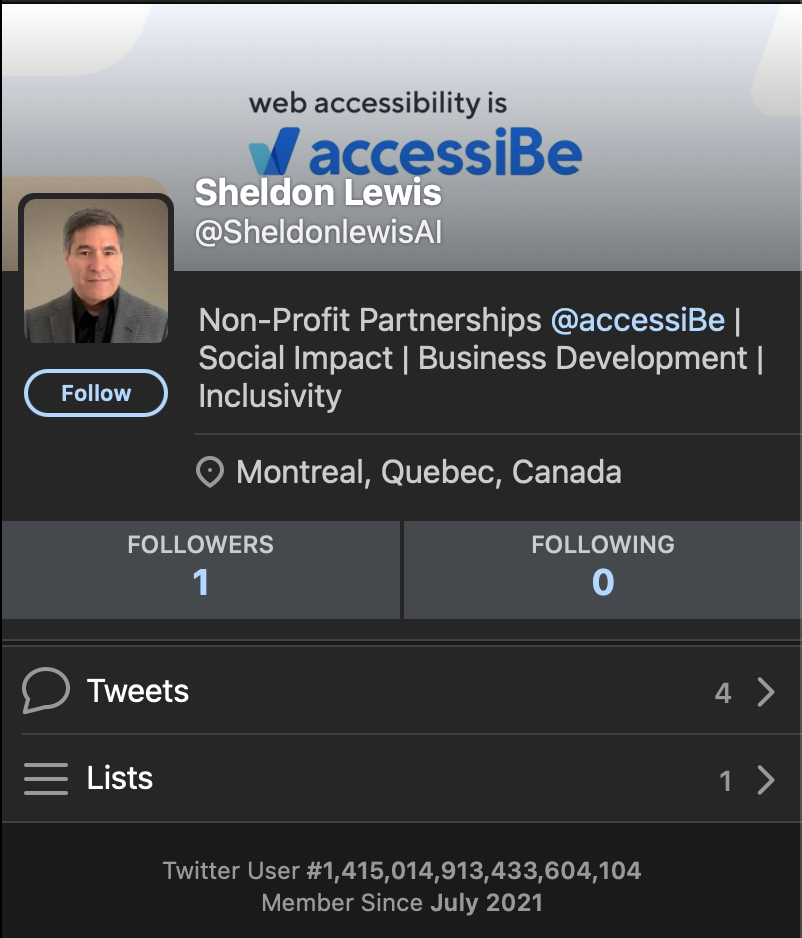 “Sheldon” looks like he just joined today to throw shade at Karl. I smell something rotten and suspect an "executive" with the mindset of a child went and created an account, got an AI generated profile photo, then decided to play with the accessibility community.

I asked for a list of the "professionals" that support AccessiBe. No list has been made public yet. A lot of "pot meet kettle" especially when others have come to the conclusion that AccessiBe needs the benefit of the doubt.

They had that benefit of the doubt moment and they squandered it. Personal attacks, fear-based attacks, attacks against professionals in the industry with decades of experience and knowledge. Even going as far as this schoolyard bully behavior. What's next? I think the attacks get worse.

AccessiBe execs get defensive real quick when there is any opposition to their product and they hunch down like a trapped cat in a corner and they hiss and arch their backs, spewing bile and venom at those who oppose them. Which indicates they know their prodcut is bullshit, yet the money they get from telling corporations and organizations that they can make their sites work even though they don't. Their product is a modern-day Ponzi scheme.

The overlay (and any overlay or aid that is plastered onto a site) does not work. The proof is in the pudding and the proof has been well-researched, well-documented, and presented by many. So many that it has been in the news, it has been featured nationally, and even the lies AccessiBe has perpetrated have been uncovered and exposed them as the frauds they are.

How Low Can You Go?

Well, as evidenced by the attack on Karl Groves today (as of this writing), you can plainly see that they will stoop to no level and the bar should be set very low for any dealing with or support for this wolf in sheeps clothing.

Let's revisit some of those, shall we?

and those are just a few.

I will be calling for the W3C to remove and ban AccessiBe for their behavior for life for what they have done as it does not represent the W3C, it's people, past, present, and future. It certainly does not carry itself in the manner that an organization would being a W3C member. That said, my next move is to research and find out what channels to go through to get this done.

The bottom line here, if I may, is to not deal with or believe anything AccessiBe has to offer. Sites cannot be 100% accessible all the time. It is nearly impossible (unless you have a small blog and never update it after making it "100% accessible") to make a site that changes and evolves, "totally accessible".

The evolution of a site does not allow for that and things break and accessibility changes and things become inaccessible until fixed by a human. Can AccessiBe's snake oil do that?

Take it from the people that are in the disabled community that have experience with the barriers that this and any other overlay says it offers, yet just creates more barriers to accessibility. An overlay does not work. You want compliance? Get a hold of a company that does auditing and has a staff that employs professionals that have worked in the accessibility space that know how to make your site accessible.

Don't take the easy way out. Companies that like to spend money just to throw it at a company that says they can do one thing, yet it prodcues another are just not educated enough. I wrote an article that touched upon how to get stakeholder and managerial buy-in at your organization it even stresses the importance of getting peers and colleagues in on accessibility as well.

Don't believe the hype. Overlays, no matter who they are from, and there are many companies out there selling the snake oil these days, do not work. It has been proven they don't. Consult a professional or a company that is reputable in the accessibility space. There are plenty of those companies out there looking out for you as well.

After some research when seeing a tweet, I looked up Sheldon, who is in fact real. And a person with a disability. Don't come at me with "You're attacking a disabled person." I'm not, I'm questioning professional ethics and confirmation bias. However, the irony remains.

Sheldon is real. Sheldon is also a person with a disability. Yet, Sheldon created a Twitter account to disparage remarks made by Karl. The account was created in July. Had one follower. Which reeks of new. 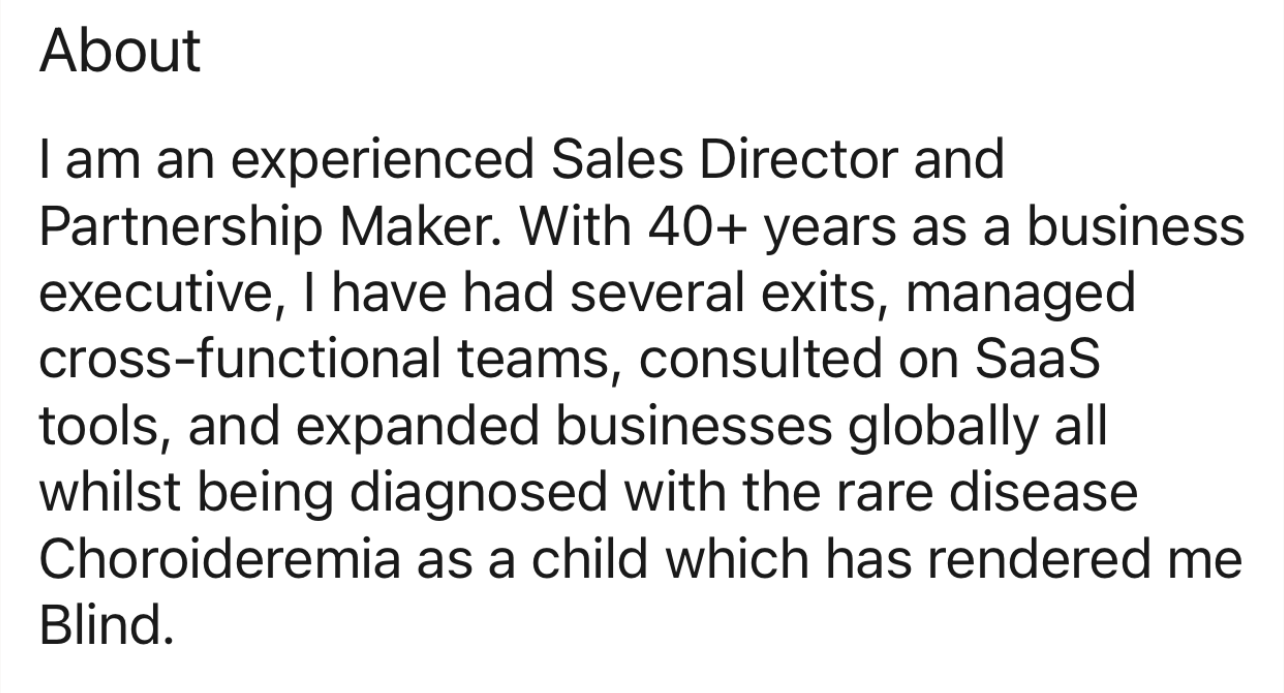 There are lots of people in the disabled community that are on the side of AccessiBe, and that's their choice, of course. But for a manager to make an account just for the sole fact of leaning into a conversation and throwing hasoline on an already out of control tire fire is beyond me.

Two things that are apparent in the accessibility community:

Which brings me this last point. 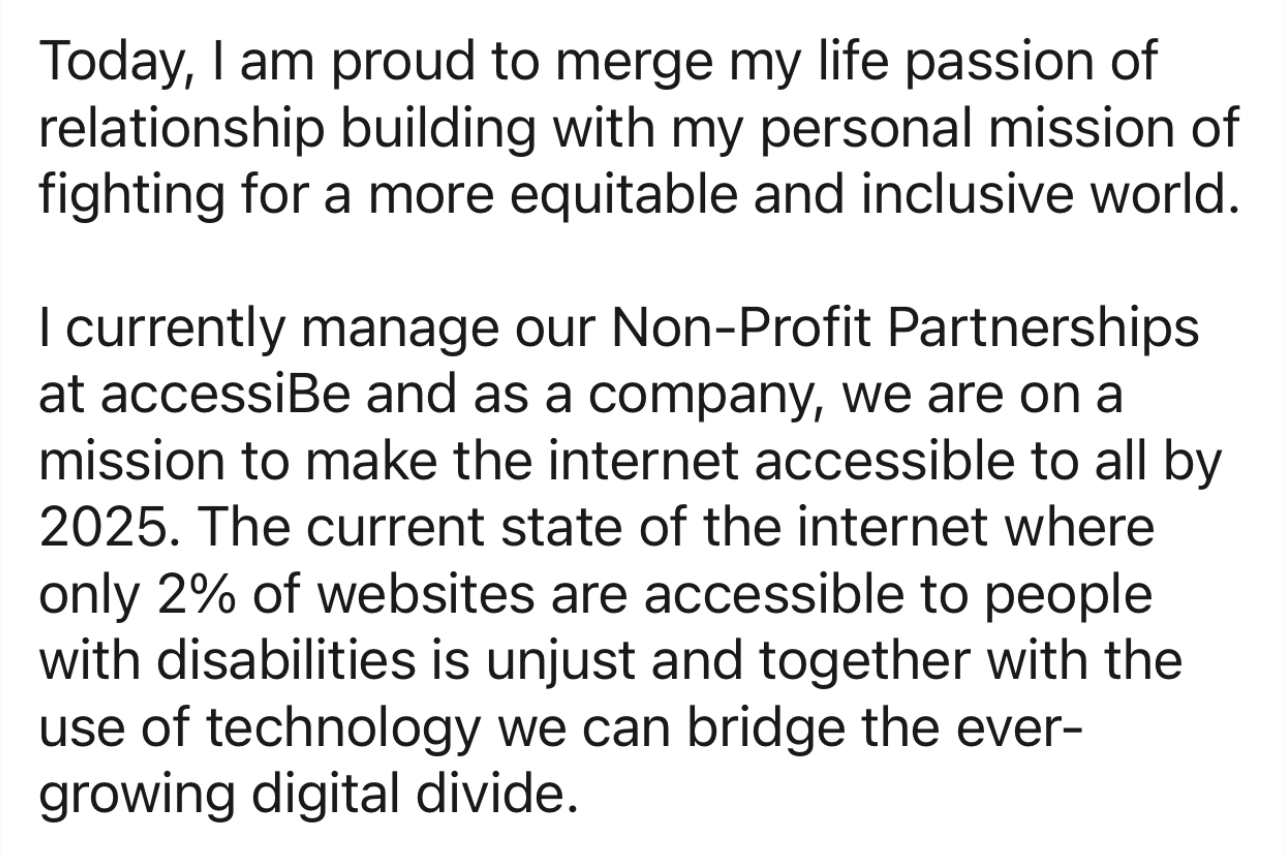 Hard to achieve that dream when the company you stump for doesn't make the web accessible.

The current state of the internet where only 2% of websites are accessible to people with disabilities is unjust and together with the use of technology we can bridge the ever-growing digital divide.

There is a lot to unpack there. First, that 2 percent is probably higher due to AccessiBe being implemented by entities that do not know how the product affects users. So it may even be 99%+.

It is unjust, but AccessiBe contributes to that unjust.

Technology has shown (as has the people that create it) that ML, AI, cannot be trusted to solve all the problems. It doesn't bridge, is creates barriers.

For someone that preaches bridging the ever-growing digital divide, it strikes me as ironic that Sheldon would create a Twitter account, tweet a disparaging tweet, deactivate the account, and contribute to a company that is well-known for guerilla-style attacks on people with decades in the accessibility community.

By the by, Sheldon is back and still pedaling the same farcical, muck. 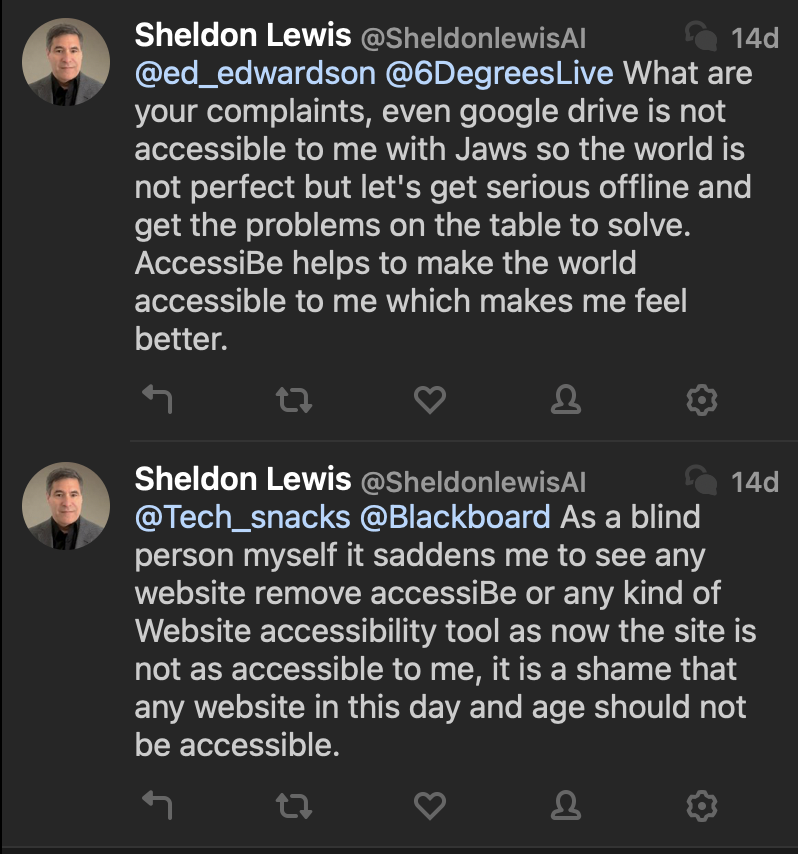 It just doesn't end. That's the real problem, and with a boat load of money behind them, and the company reaching out to unaware entities and asking them if they need a solution just to sell uneducated stakeholders and managers snake oil, is the biggest problem.

Sheldon may be a very nice human being, I'm not saying Sheldon isn't. However, what I am saying is Sheldon is part of the problem. What woks in your browser doesn't work in everyone else's.